America Now, a collaboration hosted by three Smithsonian museums, is an annual series that celebrates the depth and breadth of America’s history, art and culture.

In 2017, the National Portrait Gallery, National Museum of American History and Smithsonian American Art Museum present multiple programs on three consecutive Saturdays to celebrate the centennial of President John F. Kennedy’s birth. The John F. Kennedy Presidential Library and Museum is spearheading a series of “JFK 100” events and initiatives across the nation aimed at inspiring new generations to find meaning in the enduring values that formed the heart of the Kennedy presidency—courage, freedom, justice, service and gratitude.

Join the conversation about the centennial at #JFK100. Information about centennial activities across the country is available online at jfkcentennial.org/events/. 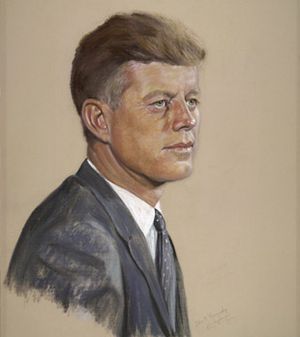 This evening event celebrates JFK and the power of portraiture with activities and live music performances. SAAM presents performances by The Washington Ballet and Liner Notes inspired by Kennedy’s legacy in the arts. Continue the Celebration of JFK’s legacy with an After Hours Birthday Party. Enjoy lighting talks, 1960s themed food and drink, objects out of storage and live music exploring the impact of the Kennedy era on today.

America Now is a three-museum collaboration with the National Portrait Gallery, National Museum of American History, and Smithsonian American Art Museum and is made possible by the generous support of the Robert and Arlene Kogod Family Foundation. The Washington Post is the media sponsor for this year’s America Now.