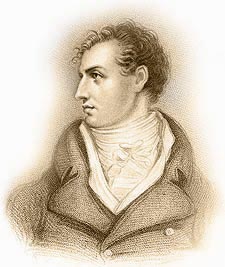 Portrait of Lord Byron (1814).
The Lord Byron Collection in the RBC has grown slowly over the years. Serious development began after 1960, chiefly with funds from the recently established William Whitaker endowment. The most important infusion of materials into the collection did not come, however, until 1994, when the RBC (again with Whitaker funds) was able to acquire the outstanding Byron collection of Robert Voitle, former Professor of English Literature at UNC, from his widow, Dorothy Voitle. Further smaller purchases have been made since that date, and today the collection holds approximately 360 titles either written entirely by Byron or containing selections from his works. Of these titles, about 195 are lifetime publications, including first and later editions and significant bibliographical variants. Finally, there are an additional 95 secondary works in the collection—biographies of the poet or critical treatments of his works. Nineteenth-century engraving illustrating Byron’s Don Juan, Canto I, Stanza 92.
Significant rarities include first editions of Byron’s Hours of Idleness (Newark, 1807), Waltz (London, 1813), and Ode to Napoleon Buonaparte (London, 1814). With the addition of the Voitle collection, the RBC also acquired a splendid copy of the first edition of Don Juan (London, 1819–1824), all six volumes with uncut pages bound in their original paper-covered boards. The collection also contains three copies of The Liberal (London, 1822–1823), a short-lived periodical founded by Byron and his friends Percy Bysshe Shelley and Leigh Hunt. One of the copies is in the original wrappers. The bibliography of the poet’s lifetime editions is notoriously complicated. The Byron Collection in the RBC documents this well through the presence of multiple printings of the first editions of such works as Hours of Idleness (1807), Poems Original and Translated (1808), and Childe Harold’s Pilgrimage (1812–1818). These variants, even those unauthorized by the poet, are of great interest to students and scholars seeking to understand the evolution of the texts in question or to trace their publishing history. Byron's Waltz (1813), published under a pseudonym. Checklist no. 26
In 1986, the RBC acquired a collection of the imprints of the English publishing firm of John Murray and his successors. Originally belonging to the Murray family itself, the collection contains more than 10,000 volumes, which are a very full but not comprehensive representation of the firm’s activities from its origins in the eighteenth century to 1977. Murray was perhaps the most important of Byron’s publishers, and the Murray Collection includes nearly 50 Byron editions, mostly posthumous ones. Access to materials in the Lord Byron and John Murray Collections is provided through the University Library’s online catalog.