skip to main | skip to sidebar

Experience of Ethereal Connectivity: a response by Kristin Abhaltar Smith 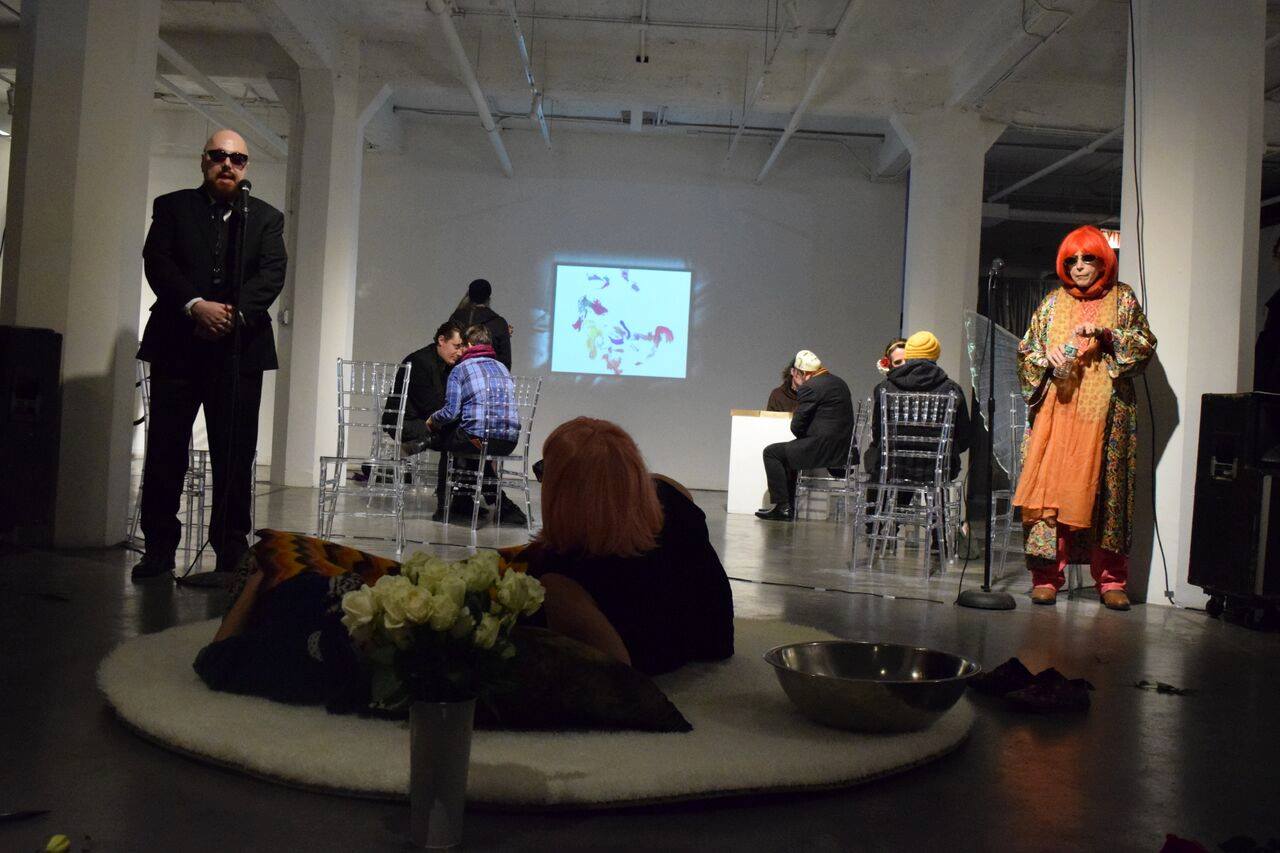 DAD ART, An INTERACTIVE Performance about Life and Death and Love: Linda Mary Montano
Sunday, November 11, 2018
Presented by Defibrillator Gallery and Zhou B Art Center in collaboration with local artists:
Angeliki Tsoli | Paul Escriva | Emily Eddy | Zachary Vanes | Lauren Pirritano | Andy Somma | Carole McCurdy | Pamela Strateman | Joseph Ravens and the Audience
Image credit: Holly Arsenault per Kazum via Paul Escriva.
********************
An ethereal atmosphere was created by Linda Montano and her company of performers at the Zhou B Art Center. During the three hour performative ritual Dad Art, the room was inhabited by a blurred assembly of audience and artists. Humans, filling benches and scattered transparent chairs, were adorned in glorious colored hair, wings, ‘real news’ signs, and utilitarian jumpsuits. These garments were notably illustrated the personality of the wearer and were more fashion than costume. The distinctively dressed bodies made the large yet intimate room resonate with stories of remembrance, forgiveness, and mourning as individuals were welcome to approach a microphone to speak on the topic of their fathers. Occasionally a whistle would blow, cueing Linda Montano to lead the crowd in a song glorifying the mysteries of the pancreas, the pineal gland, and other puzzling yet seemingly necessary bodily organs. A video of Linda Montano’s father, intermittently silent and subtitled, provided an emotional and visal backdrop to the space. The moving images show her father playing the trumpet, eating, painting, and struggling with his final breaths as the film documents the last day of his life in home hospice care. The artist comments on the images of her father’s paintings, describing his zen-like practice of spending an hour a day absorbed in mark-making with a set of poster paints. She speaks of his practice as a desire to communicate and express his deep love of life. She plainly states that his paintings “were not art”. The transcendent afternoon of remembering, sharing, and processing death concluded with a procession outdoors and the burning of sage and written memories generated by the participants. The event was less of a performance than a experience that provided an invitation to reflect and give substance to memories of childhood, fatherhood and a visceral connection to lost opportunities to give and receive love.
****
In the spirit of Linda Montano’s Performance Artists Talking in the Eighties
Some Q and A between Joanna Furnans and Kristin Abhalter Smith
Joanna Furnans: Why does this work feel important to you right now?
Kristin Abhalter Smith:  Personally, I was drawn to seeing this work because of the reputation Linda Montano has in the world of performance. I have had her book of transcribed conversations, Performance Artists Talking in the Eighties, on my shelf for several years and often turn to it for inspiration and its reminders to me of how artists are the most honest, inquisitive, and fascinating people. I have a great affinity for her work and am drawn to people who think like her. I don’t think I can speak to the importance of the work beyond my personal experience, but I do find a lot of richness of spirit in the performance community in Chicago. This was Linda Montano with an unmistakable ensemble of Chicago artists. The work has a very intimate, welcoming quality. This is the kind of feeling I want to have when I am attending a performance. I want to be included in the experience and be involved in the making of the story. I think that there are many performers who are wonderful storytellers, but not all of them ask you to reflect on your own memories while they are sharing theirs. Dad Art offers space for reflection between the performative moments. I respond to the power and the dignity of the wisdom of years, (decades and lifetimes!) represented in the work and I suppose that is what is most universally important about what is happening on the stage they are creating. Linda Montano is an important artist and the ongoing relationship she has with Chicago and performance artists is fascinating. The reason I feel this way has developed from being made aware of the depth of feeling among the performers I call friends. I feel honored to have the opportunity to catch a glimpse of these relationships and hear about some of its wonderful history through Paul Escriva, Montano’s collaborator and friend.
JF: What is it like to attend a durational performance?
KAS: The format is not completely unfamiliar to me, as I am accustomed to art events that last several hours, when people can come and go. I actually missed the first hour of Dad Art and am not sure how this would have changed my experience. I didn’t feel like I needed any kind of special introduction to the space because the atmosphere I encountered had already been established and throughout the afternoon, people passed through the space in a casual way. The venue was a large sculpture gallery at Zhou B art center and the seats were benches and floor. There was a lot of repetition in the format, with the musical interludes about organs which bracketed the storytelling. This reminded me a little bit of a religious event or something I might have experienced at a summer camp in my childhood. I liked the casual atmosphere and the willingness of the audience to participate. I guess I just found it relaxing.  There were performers walking around inviting audience members to dance with them to music in headphones. I would have wanted to be chosen to participate in this activity, the dancing part, but I didn’t feel moved to approach the microphone. Perhaps I felt the space sacred to those who had lost fathers to death. This performance seemed a tour guide for that sacred river I have yet to cross.

Posted by LINDA MARY MONTANO at 9:57 AM No comments: